The Republican controlled house has finally delivered on its promise to ‘repeal and replace’ the Affordable Care Act, aka Obamacare. They have ramrodded the American Health Care Act, (let’s call it Trumpcare, a counterpoint to Obamacare) through the House and it now sits as a steaming, smelly pile on the Senate’s polished, antique table. A lot has been said and written comparing the two plans. In this post I will concentrate on the following two salient points which tend to get lost in the punditry:

In an earlier post My Experience with the Affordable Care Act, I had written about these costs and some ways of reining them in. The elderly and those with preexisting conditions, for obvious, understandable reasons, consume a large portion of health care. From an economic standpoint, it makes sense that they should pay more. But how much more? Under Obamacare the premiums for the elderly could be at most three times that charged for the young. Under Trumpcare they could be up to five-times higher. The elderly are mostly the retired and therefore on a fixed income. Most are of modest means. This segment of the population will be hit with higher premiums when they can least afford them.

In addition, people with preexisting conditions (again, many of them elderly) will be put into a separate ‘high-risk pool’. Insurance companies are then free to charge them whatever they want. The government will put in 8 billion dollars to help offset some of the cost, but this is woefully inadequate in the long term. Plus, in times of budget shortfalls, this pool of money could be sequestered for other purposes that the government thinks more pressing then the health and welfare of its citizens. Military spending springs to mind, a topic for another day, but I digress.

Having a separate high-risk pool makes absolutely no sense. In other insurance industries e.g. auto insurance, high risk drivers are the young, the single and the ones with sporty, fast cars. They are not separated into a high-risk pool. They are part of one big pool of drivers. Their premiums are modestly higher. The premium for a young, ‘high risk’ driver would be about 50% higher than an elderly, ‘safe’ driver with the same car living in the same neighborhood. With this spread in premiums, the auto insurance industry still makes a profit. Now contrast this to the health care premium that an elderly, ‘high risk’ person would pay under Trumpcare in its present form. It would be 400% higher than a young, healthy individual.

Why are premiums rising so fast? Because health care costs keep rising at a rate much faster than inflation. It is the inexorable market pressure to raise share prices above that of the competition plus a healthy dose of greed. Providers raise prices because they can and the consumers or patients are forced to buy. That is the simple explanation.

Here are some examples:

I could go on with more examples, but you get the point. Prices keep increasing and the consumers are forced to pay. What else can they do other than forego healthcare! Is this the America we want? The government stepping in to foot the bill is not the answer because in that case, someone is paying. They are the taxpayers, yes, you and me.

The solution will require some hard thinking and decisive action. Health care costs have to be controlled. I know ‘price controls’ are ugly words, anathema to a free market. But running the country into bankruptcy is not an option either. The government has to take a decisive role in controlling prices but at the same time ensure that the providers and manufacturers make a reasonable profit. That is where the rubber meets the road since the magnitude of the profit is in the eye of the beholder (pardon the mixed metaphors, which was intentional). We can learn from other advanced economies and realize that the single payer system is not all that bad. We can have our drugs made in other countries with lower labor costs under stringent conditions that ensure quality. We can import cars and planes from abroad and are happy with their quality and safety. Why can’t we do the same with medicines?

Obamacare was a start. It tried modestly to address the high cost of health care. I hope the present administration goes further and makes the necessary changes that puts health care on a financially secure footing. In the end it does not matter which President’s name is attached to the bill. How about an amalgamation of Trump and Obama: Trubama Health care. That should make both Presidents happy.

Falcon harassed by a mockingbird 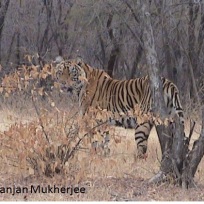